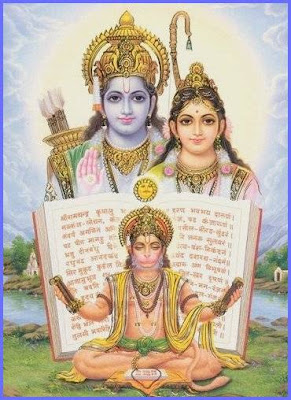 Lord Shankara addresses Maa Parvati, "There is no one, O Girija, so blessed as Hanuman, no one so devoted to Lord Rama's lotus feet! How often the Lord with His own lips has extolled His love and selfless service!" (Sri Ramcharita Manasa, Uttara Kanda: 49.4, 5)

Amongst the enlightened Ones, Hanumanji is considered to be of the highest echelon. His strength and might are simply unparalleled in the universe. His whole life inspires men towards Purushartha, courage, self-restraint, righteous conduct, devotion and selfless service.

Hanumanji is a living god, one of the seven immortals, celibate from childhood, extremely strong, a great gallant, completely fearless, wedded to the truth, extremely faithful to the Lord, charged with dispassion, highly accomplished, a devotee with supreme love for the Lord, an expert in the art of warfare and an epitome of sagacity, knowledge and valor. Hanumanji has the ability to grant the eight siddhis and the nine nidhis to his devotees.

Whatever be the adversities or obstacles on his path in the course of his service to Lord Rama, Hanumanji would always overcome them and march forward with aplomb. No enticement could sway him. Though a paragon of virtues, there was no trace of vanity in him.

When Hanumanji returned after locating Maa Sita and single-handedly ravaging Ravana's kingdom and his ego, Lord Rama enquired, "Hanuman! How did you manage to burn down the fortess of Ravana, the conqueror of the three worlds?"

Hanumanji replied, "O Raghunatha! That was all by the virtue of your might. And in no sense was the strength of my own, O Lord." (Sri Ramcharita Manasa, Sundara Kand: 32.5)

So exceptionally unflinching was the faith and total devotion of Hanumanji, the worthy son of the Wind-god!

Hanumanji is considered to be an Anshavatara, the last and final amongst the eleven Rudras, of Lord Shiva. This finds ample illustration in the following anecdote.

Once Maa Sita invited Hanumanji for a meal and prepared a number of delicacies Herself. Hanumanji sat down for the meal. He was blissfully savouring the ambrosial food prepared and served by Sitaji, quite unmindful of the quantity of food consumed by him. Maa Sita was surprised to see Hanumanji with such a voracious appetite. Even the delicacies prepared by Her were about to be finished. Then she took recourse to meditation and came to realize that it was Lord Shiva Himself who was having food in the form of Hanumanji. Mother Sita then chanted "Om Namah Shivaya" while serving some more food to Hanumanji mentally praying to Lord Shiva to become satiated. Her prayers were instantly answered and Hanumanji, the incarnation of Lord Shiva was finally satiated.