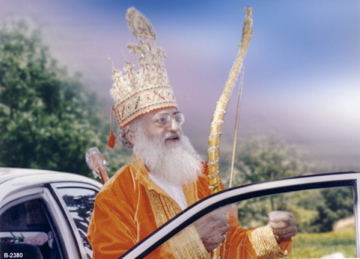 Maharshi Valmiki has thus related the virtues of Lord Rama,

“Sri Rama is well versed in the tenets of Dharma, firm in his commitments, an epitome of propriety, uncritical, forgiving, compassionate to the poor and miserable, soft-spoken, grateful, in control of His senses, kind-hearted, endowed with a steady intellect, ever engaged in universal good, non-calumnious, agreeable in His speech to all beings and truthful.”

Lord Rama never found faults with anybody. He was always tranquil at heart and would always speak in a mellifluous (sweet) and consoling manner. Even if somebody used harsh words against him, He would not retort. He would be forever be grateful to anybody who did Him even a single favor, and would forget and forgive hundreds of offences committed against Him by others. He would cultivate association with only those possessing noble character, those advanced in age and knowledge, being always courteous to them. He would start the conversation with those people who came to meet Him, and would speak sweet and fair. Even though endowed with great strength and valor, He would never be conceited.

He would never utter a lie or foul words. He was wise and would always respect the aged. He would never indulge in acts detrimental to others or those forbidden by the scriptures. He would never listen to anything that went against the tenets of the scriptures. He would support His well-justified stand with befitting examples as adroitly as Vrihaspati, the Guru of gods. The good of all beings ensued from Him naturally. He was guileless and never in distress. He had received superior edification from elderly Brahmins well versed in the tenets of Dharma. He was very intelligent, talented, and had a very sharp memory. He was ardently devoted to His elders. He was very astute in worldly transactions and an expert in righteous conduct under all circumstances.

He was polite and discreet in conversation. He would never disclose a mantra. He had efficient and able assistants. He was well aware of when to give up things and when to hold on to them. He was free from sloth and confusion and very much cognizant of the vices of his own people and those of others. He was a knower of the scriptures, grateful to those doing Him some favor and adept in reading the minds of others. There was no place for vanity or envy in His mind. His behavior was such that nobody harbored any sense of disregard or apathy towards Him. He knew how and when to promote and nurture good people and discipline the wicked ones. He knew how to raise resources. He would collect a reasonable amount of money as taxes from the people without harming them, like the black bee that collects sap from the flowers without hurting them. He would also adhere to the spending discipline ordained by the scriptures. Because of His sublime virtues, He was extremely dear to His subjects. By virtue of His restraint on the mind and senses, Sri Rama possessed a supremely radiant personality akin to the effulgent sun.

As a father enquires about the well-being of his sons, He would daily enquire with His subjects about their children, religious rites, women-folk, servants, disciples, the consecrated fires, followers, etc. The Lion amongst men, Sri Rama would always ask the Brahmins, “I hope your disciples serve you properly.” He would ask the Kshatriyas, “Are your subordinates armed with weapons and armors are ready to serve you?”

Sri Rama would always have a smile on His face before speaking to anybody. He was wedded to righteousness. He was never interested in discussing obnoxious matters. His senses would never be swayed by vices like attachment, etc. He had a Saintly disposition, magnanimous heart and a broad mind. He was comparable to the moon in keeping all His subjects happy and to the earth in forgiveness. He would serve the elders and adore the Brahmins, the Knowers of Brahman, always seeking their company. He was a great master of archery. He possessed a definite knowledge of the Vedas and was well versed in all branches of learning. He was extremely benevolent and had conquered anger. He was full of compassion for the poor and the distressed. He was supremely pious both within and without. His body was free (and immune) from diseases. He was a good orator, had a pleasant personality and was a knower of time-space in depth. He loved His subjects deeply and in turn His subjects loved Him equally. He would never return from the battlefield without attaining victory.

He would duly pronounce a death sentence on those deserving it as per the dictates of the scriptures, but would never be angry with those whose killing is prohibited therein. Sri Rama, who suffused all abodes of the universe with joy and bliss, remained engaged in nurturing His subjects with valiance, magnanimity, valor, etc. He was respected and adored by all beings and was a man of steady wisdom (sthitaprajna).